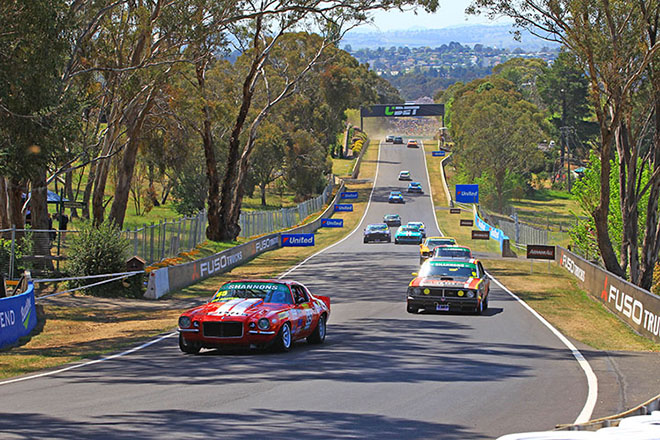 The circuit of all circuits Mt. Panorama Bathurst was the venue for the 7th round of the Touring Car Masters season and both Andrew and Mark really love it – it’s like holy ground and a track all racers aspire to conquer.

It’s an early bump in for the transporters, so for Bobby and Brenton this meant a Tuesday morning departure from Whiteline Racing headquarters in Adelaide and to keep them ‘Whitelining’ along Bobby gave Brent a very thorough lesson in country music, each disc had to play through 3 times before being changed – it is a 20 disc box set – Brent I’m told was even learning words and singing along !! I think that’s how people learn a new language, keep listening over and over – gotta love it don’t you ? !

As usual,  Birdman (Mark) got busy preparing the Camaros with both needing quite a bit of repair post Eastern Creek as well as track set up for Bathurst.

Lubrimaxx Camaro 95 – Andrew Miedecke
Major body repairs to the front of car were required to right the damage from Eastern Creek with Truck Factory stepping in to assist, diff and gearbox ratios were changed to suit Bathurst, All shocks removed, dynode and replaced for precautionary purposes, the spring rates were revised for Bathurst and as part of routine maintenance new front brake rotors were fitted.

King Springs Camaro 85 – Mark King
Body repairs were required to the left rear quarter, diff and gearbox ratios changed to suit the Mount, all shocks were dynode and the front springs were changed.
Wednesday Brent and Bob went about setting up our pit garage with the rest of the crew flying in from all over to lend a hand.  That night the boys went to, what has become our favourite pub, the Kelso for tea but were good and were in bed by 9pm as it was a 5.30 start Thursday.  The team was boosted this weekend by Timmy Bush and John Beeton (JB) from Yass – always a lot of laughs when these boys come away for a racing weekend !

Thursday 8th October, 2015 – Practice
First session was held at 7.45 am and they had been allocated 20 minutes.  For the 85 King Springs Camaro of Mark’s he was hot on the pace early reaching 256 klms on Conrod Straight and at that point was quickest for that sector, completing 6 laps the best was on the 5th with a 2.227733 placing him third quickest behind Bowe and Johnson.

For the 95 Lubrimaxx Camaro, not a quick session, but no one seemed too concerned as this was mainly due to the inability to get a clear run of traffic to really have a go.  Andrew completed 6 laps, the best on the 5th with a 2.245901 and was 7th in the standings at this early stage.

Post session 1, the crew softened the suspension and sway bar on the 95 Lubrimaxx Camaro and for the 85 King Springs Camaro, the tyre pressures were corrected as they had gained pressure during the session.

Practice 2 was held at 9.45 and again another 20 minute session, track conditions fine.

For Kingy in the 85 machine he completed 7 laps with the best on the 6th with a 2.220228 and whilst quicker than the first session a number of other competitors had found their pace and were dominating with Seton, Johnson, Bowe, Richards, Abelnica, Youlden and stable mate Andrew all posting quicker lap times.  Kingy post session was not that phased attributing lack of speed to running old tyres both sessions which had deteriorated by the 2nd and felt with new “boots” (tyres that is) he would be in good shape.  Kingy reported push up front, thus making it hard to get onto the straight with any speed.

For Andrew in the 95 machine, he would complete 5 laps the best on the 3rd, with a 2.219641 definitely much improved on the earlier session, but reported that he wasn’t comfortable over the top and this section was usually the section he was fastest through.  Andrew further went on to say that he and the 95 Lubrimaxx Camaro were capable of being quicker, wasn’t phased and totally positive.

Qualifying
Qualifying was held at 4.55 and the category had been allocated 20 minutes.  It was a hot to trot session with the field putting in quick times, in fact Johnson put in a time that blitzed Bowe’s record from 2014 with a 2.18160.  Andrew put in 7 laps in the 95 Lubrimaxx Camaro and was running 6th, on the 6th, but slowing up to allow a clean break had one last go on the final lap and put in a blinder and managed to qualify 3rd with a 2.194055 to place him 3rd off the grid behind Johnson and Seton.

Kingy was just improving his 85 King Springs Camaro getting in 6 laps, best time achieved on the 5th with a 2.204531, which would place him 7th off the grid and in good shape for race 1 on Friday.

The boys headed to the Kelso for tea and they had been recording the sessions from the racing, so sat and watched the footage looking to gain as much information as they could about how the cars were handling.

I think Race 1 at Bathurst 2015 will stay in the memory bank of all of us at Whiteline Racing for some time – Hell corner by name, hell corner it was – the rolling start field had got away with Johnson powering away, then the drama started, Andrew in the Lubrimaxx 95 camaro was on the pole line and had passed Abelnica, on the outside line was Seton and to use the words of the TCM press release, Glen swept across from the outside contacting Andrew, spinning out of 2nd and Seton was relegated to the back of the field.  Andrew sustained damage to the front left guard and would need to pit to rectify the tyre rub. Timmy Bush took to the guard with a baseball bat moulding and bending back the guard to give space between it and the tyre – Andrew would resume the field but was a lap down and had no hope on making an impact on what was a shortened race.  The trouble continued on the run up to Mountain Straight, Kingy in the 85 King Springs Camaro and Gomersall in the iSeek torana just barely touched, but it was enough to destabilise the Torana sending him spinning impacting the wall with really heavy damage to the Torana but thankfully driver Jason was okay.  Kingy was able to keep going finishing in 6th position.  The safety car circulated for a couple of laps whilst the debris from the Torana was dealt with, but the race as I said was shortened.  In the final sprint lap Johnson put in a blinder breaking the track record with a 2.194587.

The crew got busy addressing the damage – there was no further racing for Friday, the next race was scheduled for 12.30 Saturday.

The racing incident in the first race with Seton did cause some damage to the front end which on the surface did appear repairable, however, on a circuit that is so fast and unforgiving, it was decided to park up the 95 Lubrimaxx Camaro.  In addition, Race 2 was scheduled for 12.30 Saturday giving Andrew the necessary time he needed to return to Sydney, however he did not count on the fact that late Friday night, notice was sent out that the race had been brought forward to 8.50 a.m. this made it difficult for the time lines to be met for Andrew to return to Bathurst to see out the 2 remaining races.

Friday night was tea at the Kelso and to bed early for a sparrows arrival at the track.

So Saturday, as I said the race was brought forward, but again, it was cut short due to the safety car presence.  In what can only be described as an unbelievable effort, the Jason Gomersall team worked until early hours of the morning repairing the iSeek Torana – mammoth job, but they did it.

Race 2 – On arrival, the boys pushed the 85 King Springs Camaro up onto the concrete slabs so they could perform a wheel alignment.  Kingy would start off the 3rd row in 6th.  Bowe and Johnson dominated right from the onset, Abelnica was amongst it and enjoyed on track challenges from Youlden and Richards.  On the first lap Kingy made a magic move on Youlden into Griffens only to have that reversed in the Cutting.  The safety car was triggered on the 4th when Freestone was bogged in the sandpit at Murray’s corner, this resulted in a shortened race, with a one lap sprint to the end.  Kingy was able to hang onto 6th.

On return to the pit, the crew performed checks and general maintenance in preparation for Sunday’s final race.  The covers were on early and the team headed to the “A’ trailer to socialise and discuss the weekend.  With another early start scheduled, we opted for pizzas at the house where Brenton, Paulie and Shaz engaged in an aggressive UNO challenge, with Paulie the Victor !! 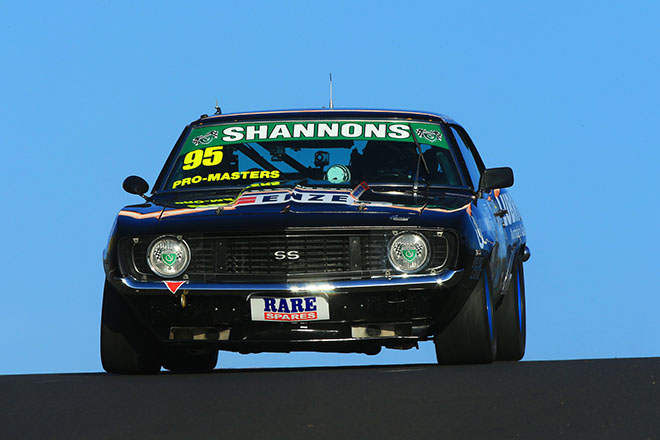 Sunday Race 3 was held at 7.50 and the field got in 7 laps.  Kingy had placed his 85 King Springs Camaro out of 6.  The field was away cleanly and momentarily Kingy moved into 5th around Richards, Youlden and Richards battled much of the race putting on an extremely entertaining dual, with Jimmy ultimately securing 4th place behind Bowe, Johnson and Abelnica who were never challenged.  Kingy maintained his 6th possie and as a result on the series standings was now in 3rd spot behind Richards and Bowe with Andrew in the 95 Lubrimaxx Camaro in 4th.

The team got busy loading up, but Bobby and Brent were not able to exit the circuit until after the big race – once on their way they encountered some ordinary weather conditions, arriving back into Adelaide Monday afternoon.

Work will now get underway in preparation for the final round for this year at Phillip Island.