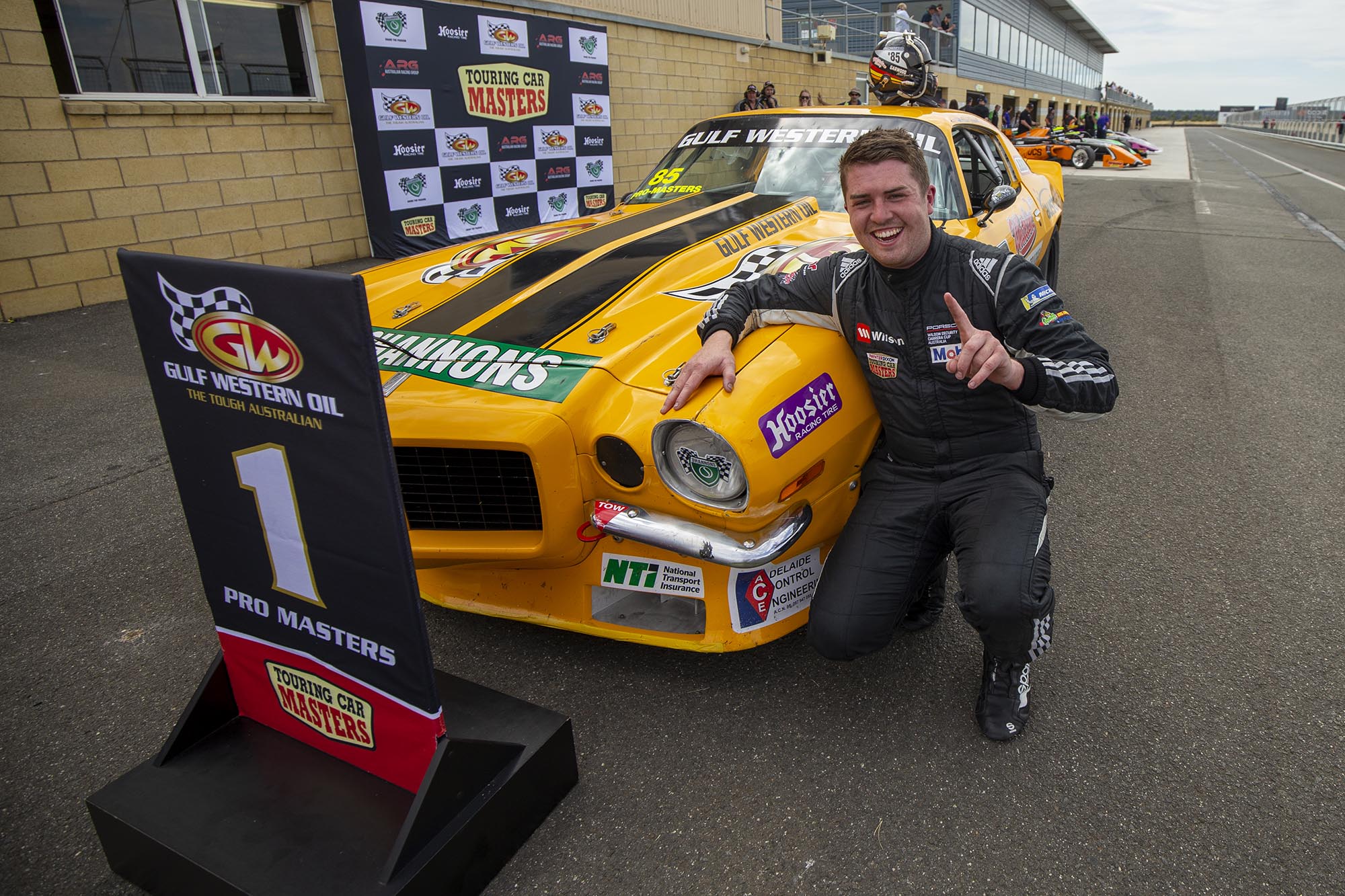 Aside from attending the sprint event at The Bend Classic in September 2020, the Boost Mobile Race Tasmania event marked Whiteline’s first time back racing competitively since the Adelaide 500 in late February last year.

Strong performances by young-gun Adam Garwood and a return to the track by the team’s most experienced ever driver, Mark King, bodes well for the season ahead as the pair of bright Yellow Chevrolet Camaros make their mark.

After a long build-up, the Whiteline team were instantly competitive at the quick 2.4km Symmons Plains circuit.

Garwood qualified the #85 1970 Camaro RS third in a tight qualifying session, missing a spot on the front row by only 0.1 seconds and missing pole by just 0.4.

The first race of the season, a 14-lap reverse grid trophy race – brought mixed results as Garwood stormed from the back of the field to 4th position, setting the fastest lap in the process.

In his first race back since the end of the 2018 season, Kingy ran strongly in fourth position for the opening four laps, before some unfortunate and slightly awkward contact with Greg Garwood’s Ford Capri Perana at turn six saw both cars caught up in an incident and suffering damage.

As well as the incident itself being unfortunate, it was awkward on account of the fact that Greg’s son was in the second Whiteline car, not that far behind..

With the damage repaired in time for the first championship race of the season, the field launched away for what would be an 18-lap race that saw Adam charging to the front early on.

After passing Ryan Hansford for second position on lap four, Garwood set out in pursuit of early leader John Bowe. After a mid-race Safety Car and subsequent restart, the Camaro pounced and after a brief battle the #85 car took the lead on lap 11.

Though Bowe closed towards the end, Adam held on to grab his first win for Whiteline and open his 2021 account in style.

Unfortunately, Kingy was a non-finisher; a broken bolt in the gearbox locking him out of several gears and forcing him to pit lane after just one lap. 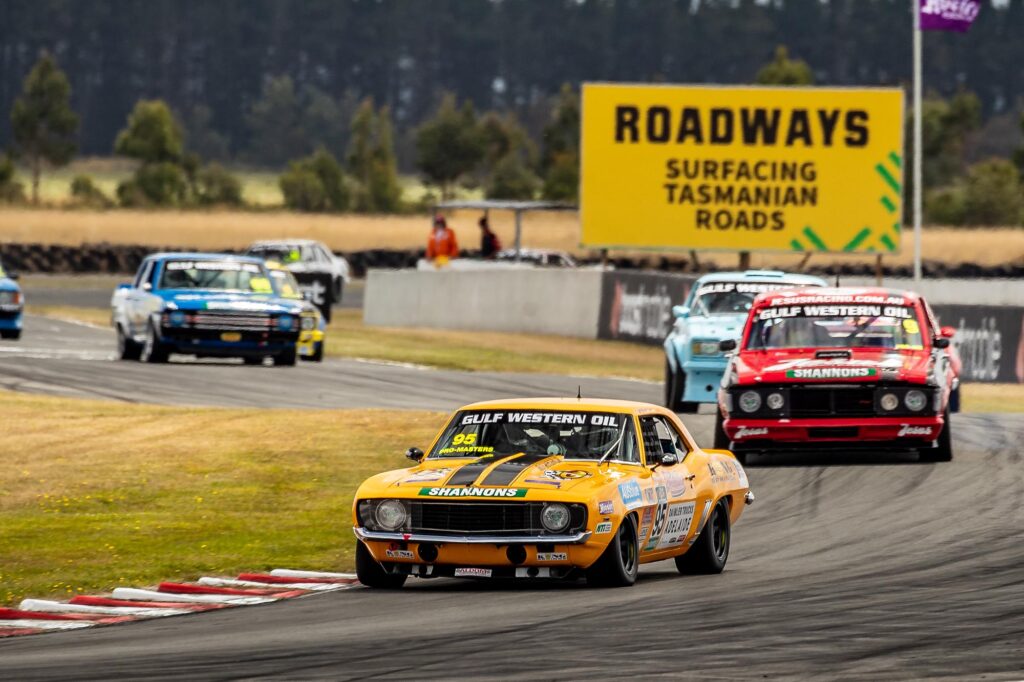 Race two saw Adam in a strong position once again, however the race was declared a non-event after Steven Johnson’s car broke a wheel and was stranded on track facing a lengthy recovery.

That declaration made the final race a winner-take-all affair between Garwood and Bowe and the pair battled for the lead for much of the race.

Adam led the first 6 laps before Bowe was able to sneak past at the hairpin to wrestle the lead away.

With the Torana (and AG’s Camaro) leaking some oil and making conditions slippery, Garwood elected to conserve his second position on track and score some valuable championship points, while Bowe was able to edge away and win his 100th TCM race.

The pair were locked together on points following the round, Bowe winning on countback on account of winning the last race of the weekend.

Kingy had a much more promising race: after starting from the back, he worked his way forward to third position in the ProAm class and seventh position outright in a strong comeback performance.

ADAM Garwood’s win in the first championship race of the season was the second time in two seasons and third time ever that a Whiteline Racing Camaro has won the opening race of the TCM year.

Adam Bressington won the first championship race of 2020 at the Adelaide 500 driving the #95 Camaro, while Andrew Miedecke took victory at the same location in the first race of the 2015 season, driving the same car.

Bresso also won the Trophy Race at the 2019 Adelaide 500 meaning; the team is three-for-three in opening rounds in recent TCM times.

Adam Garwood’s win in race one was his 4th race win in TCM competition, and his first since the 2017 season.

Symmons Plains also marked his second TCM round podium finish, with that first round victory surely not too far away! It was also the 4th race win for the team’s 1970RS Camaro and the first since Mark King drove it to victory in Darwin in 2018.

Mark King should join an elite Touring Car Masters club when the series resumes for Round two in a few week’s time: the three races that counted at Symmons Plains (Race Two was declared a no-race, meaning it does not count in the record books) were the 196th, 197th and 198th of his career.

With four races at each round, the chances are the big double century will come up next time out.

When he reaches the milestone, Kingy will join just four other drivers in the ‘200’ club: John Bowe, Tony Karanfilovski, Jim Richards and Cameron Tilley – who completed his 200th at Symmons Plains.

The team’s 1970 Camaro isn’t far away from the same milestone: It now has 194 TCM races started, so watch out for Round 3 in a few months’ time.

WHITELINE Racing will return to the track in late February when the second round of the Gulf Western Oils Touring Car Masters series returns to Mount Panorama for the first time since November 2019.

With TCM scheduled to finish the 2021 season at the Mountain, it will likely mean that this year is the first that the series will have tackled the famous track twice.

The last time TCM visited the famous 6.213km venue, Whiteline featured on the TCM podium – with Adam Bressington second overall for the round.