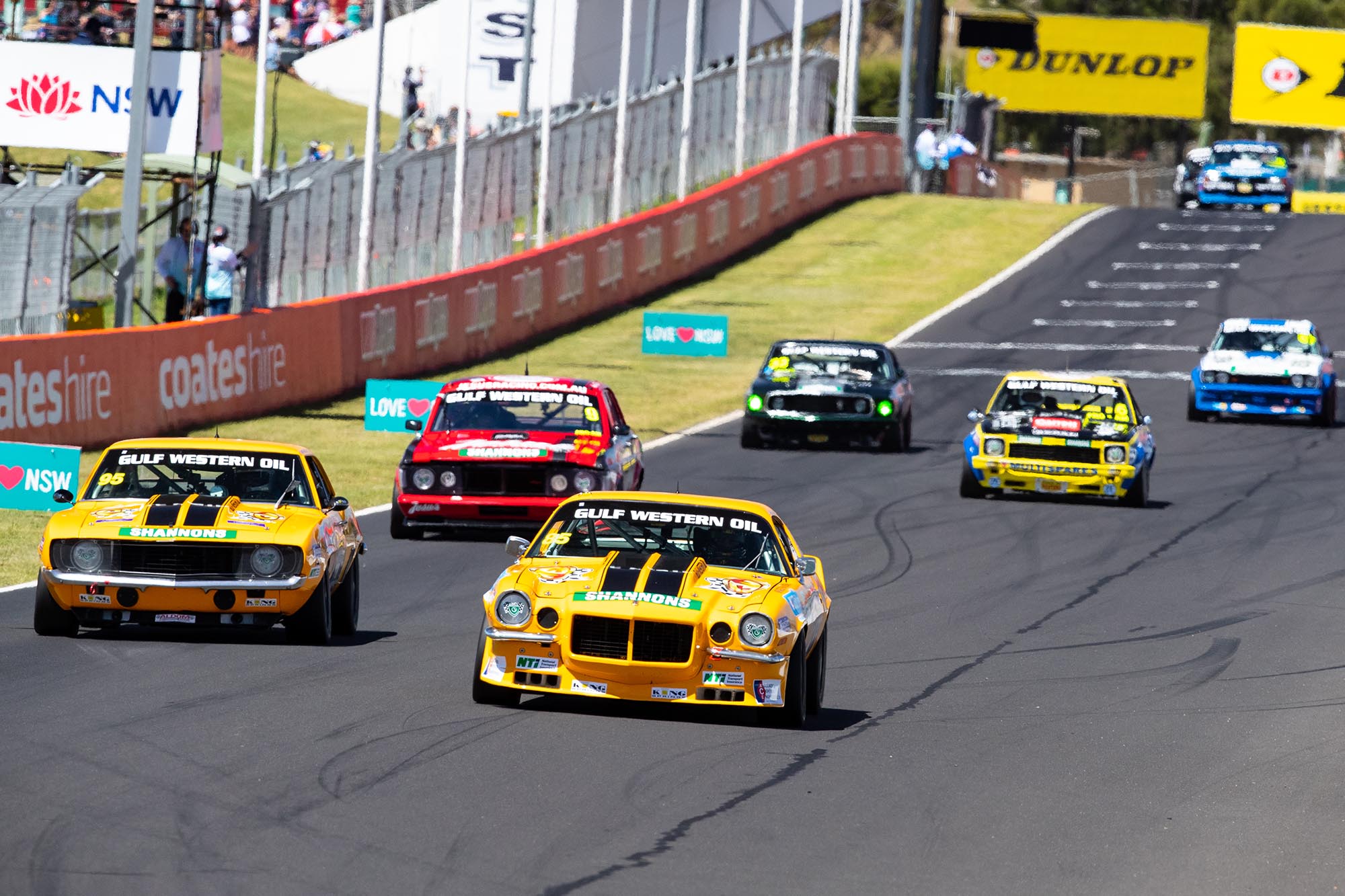 ROUND TWO of the 2021 Gulf Western Oil Touring Car Masters Series at Mount Panorama proved to be a challenging weekend for Whiteline Racing – but it was not without its highlights.

The team’s first pole position in a decade, some fighting drives through the field by Adam Garwood and continued progression up the order from the returning Mark King showed the potential of the team’s Chevy Camaros on the Mountain.

With practice cancelled due to some Friday morning Mount Panorama fog, the TCM field launched straight into the 20-minute qualifying session later that day – and it would turn out to be a very good one indeed.

Adam Garwood took just four laps to bank his best lap of 2m17.2872; more than good enough to beat Ryan Hansford to pole position by more than half a second. 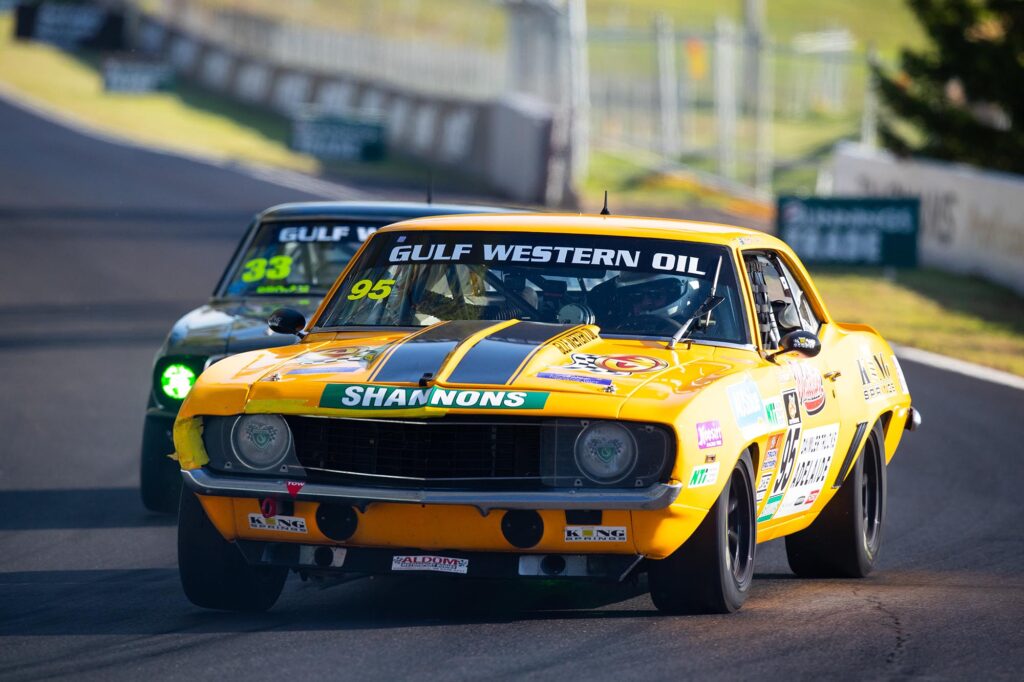 After a lengthy warm-up process, the Trophy Race was ultimately a short four-lap dash on Friday afternoon and saw both cars make good progress: Kingy finishing a strong sixth while Adam charged from the back of the field to finish just behind in seventh; the pair crossing the line side-by-side.

Unfortunately, things went backwards for the #85 car from that point on.

As the car rolled to the dummy grid before the first championship race, a serious noise from the engine forced the team to withdraw the car from Race 1, costing Adam his share of the championship lead he’d held since Tasmania.

Damage to the bottom of a spark plug proved that the engine had ingested something foreign, causing internal damage.

The team went to work putting in the spare; while Garwood would start from the back for Race two on Sunday morning.

There, he stormed through the field and set the second fastest lap of the race as he and Ryan Hansford – who had cut a tyre in race one – both scythed their way through towards the front to ultimately finish seventh.

That put the young Tasmanian in the mix for the final race of the weekend, Garwood using his raw speed to his advantage as he leaped to fourth by the end of lap one before engaging in a battle for the lead of the race with Ryal Harris, Hansford and Marcus Zukanovic.

The fight lasted four laps before the #85 car was again forced to the sidelines with further mechanical problems.

In #95, Mark King had a much less dramatic weekend and netted a solid haul of championship points thanks to three consistent finishes. 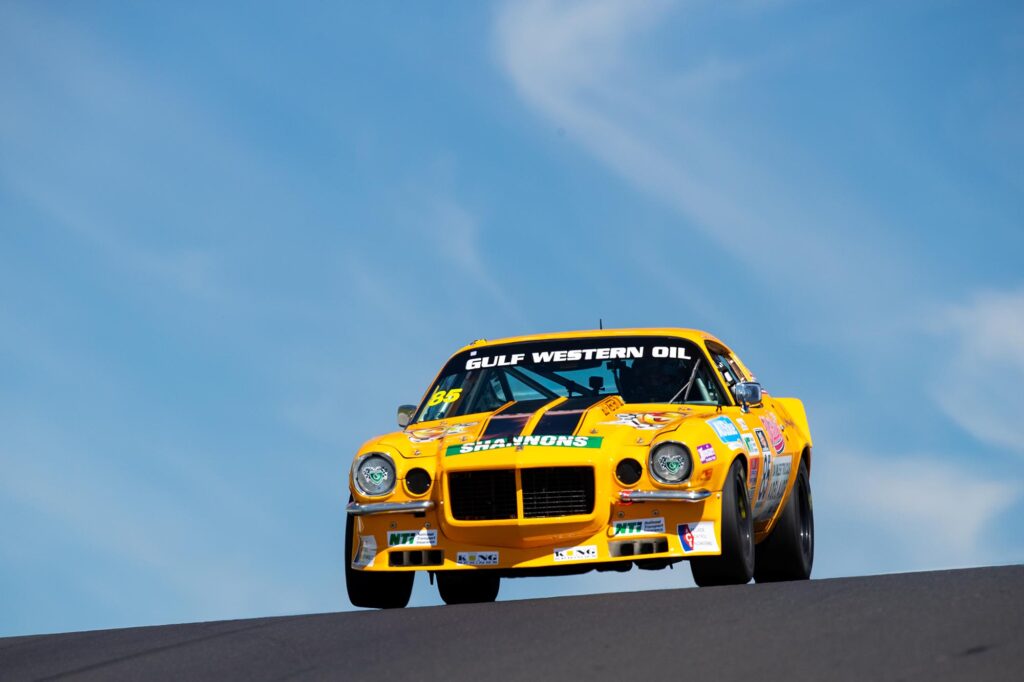 Results of eighth, ninth and ninth, respectively, were enough to see Kingy finish eighth overall for the weekend and hold on to 11th outright in the championship – though less than 20 points outside the top six overall.

Kingy’s best lap of the weekend, in race two, was also a full 1.5 seconds quicker than his qualifying benchmark as he continues to gel with the car after several seasons out of the seat.

All in all, it was a challenging weekend for the team at Mount Panorama, with the potential of Adam’s raw speed coming undone by unfortunate mechanical gremlins.

Still, he holds sixth in the championship – less than 120 points from the series lead heading into the third round in two month’s time.

The speed shown by the Whiteline Camaros remains a promising indicator for a competitive four rounds ahead in 2021 – including a Mount Panorama return for the season finale’ this November.

Adam Garwood’s pole position on Friday was a memorable moment and represented plenty of firsts – both for the driver, the team and the series.

It was the young Tasmanian’s first pole position in TCM in his 21st round start, having previously qualified on the front row for the Adelaide 500 last year.

Remarkably, it was also the first time that a Camaro had been on pole for a TCM race since Sandown in 2011!

MARK KING joined the 200-club on the Mountain in the first championship race of the weekend.

The Trophy Race was his 199th TCM start, meaning Race 1 was his 200th and saw him join an elite club of just four other drivers; John Bowe, Tony Karanfilovski, Jim Richards and Cameron Tilley.

The #85 car started three of the four races at the weekend, meaning it now has 197 TCM races in its own record book; all going well, it will reach race No. 200 at Sydney Motorsport Park in May.

Only two other cars have ever started more than 200 TCM races; the famous Mustang ‘Sally’ raced by Drew Marget, John Bowe and Steven Johnson (233) and Whiteline Racing’s 1969 Camaro, which now has 260 race starts to its credit – the most of any TCM car in history. There have been 322 TCM races contested since the series formation in 2007.

TCM and Whiteline Racing heads to Sydney Motorsport Park in early May for Round 3 of the six-round 2021 Series.

The Western Sydney venue, 3.93km long, has seen success for Whiteline in the past, Andrew Miedecke winning the 2011 and 2014 TCM rounds at the venue – with three race wins along the way.

The team last raced there in 2019 at the Muscle Car Masters event – which included TCM racing under lights for the first time.